VoiceFirst Exploits of the Ski Man

It started along about 1991 on the NeXT Computer NeXTstation I bought used for three grand, it was simply awesome. As most techies know, the NeXTstep Operating System became Apple Mac OS version X when Steve Jobs returned to run Apple. A colleague turned me on the Simon Says! application [I am not sure of the name] that allow a number of operating system commands via voice like, “Simon Listen Up! Open a Terminal window.”

Then on Amazon Prime Day in 2016 I bought the Alexa Echo device. The ONLY Alexa device for over a year, maybe two. It had potential but very little else.

In October 2017 I joined forces with Tom Montelione, a business colleague of several adventures and we launched Afients to create “audio dashboards” — what Amazon Alexa calls “skills” to interact with data in the cloud by barking commands to your Echo . We soon renamed the startup: Agile Audio Dashboards.

For the new year we created a number of Skills and hired various developers, until we hit pay-dirt: SurveyLine. In a joint venture with Voice Metrics LLC of Columbus, we created a platform that is much like SurveyMonkey® but via Voice commands over an Alexa device or Google Assistant.

In June 2019 we launched a VoiceFirst SaaS [Software as a Solution; or VFaaS: VoiceFirst application as Software] on top of the SurveyLine platform… an app inside an app to deliver instant skills on at the time over 50,000 Alexa devices. Complete with the ability to send TEXT messages in almost Real Time. We call it Virtuality Suite. It started out in Hospitality but now serves any and all industries.

In October 2019 we began to resell the amazing Pound 250 mobile speed dial solution. You have probably heard advertisers using it to instantly drive traffic to a website or call center. In fact, you can reach out to me 24/7!

Fast forward to June 2020 and my next personal effort: VoiceFirst Careers! 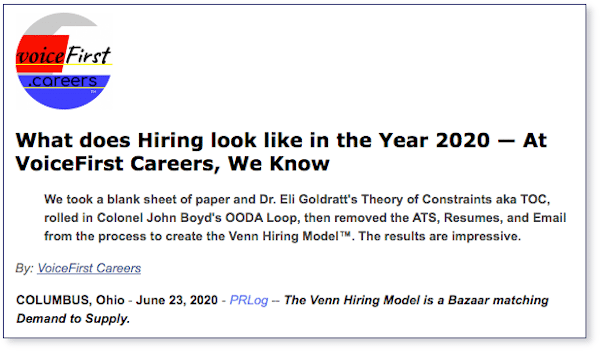 What can I build for you?

P.S. We have almost 11 hours of Podcast Episodes on ALL major platforms including Amazon Alexa FlashBriefings as well as a Samsung Bixby Marketplace “Capsule” based on a Podcast. Search for VoiceFirst Careers.
__

Welcome to Episode 21T on Bad Multitasking For Job Seekers Do you ever just want to scream, especially when reading the Help Wanted adverts? Me too, and I am not even looking for work! The worst for me is the call for “Great Multitaskers... Continue →